Looking out the window at the empty streets below, it is remarkable to recall how different the world was just six weeks ago. From a human perspective, we want to recognize the impact Covid-19 has wrought on communities around the globe with medical and economic challenges unprecedented in the modern era. From an investment perspective, the question on all investors’ minds is, “where do we go from here”? We have gone from the best of times to the worst of times in record fashion. Vladimir Lenin of all people observed “There are decades where nothing happens; and there are weeks where decades happen.” The first quarter of 2020 was certainly the latter.

Recall on February 19th US equity markets hit an all-time high, unemployment was flirting with record lows, stable to improving corporate earnings buoyed valuations, robust consumer confidence, consumer spending, and a tenuous truce was on the books with China related to trade. Amidst this positive backdrop, expectations were high for the bull market, born in March 2009, to continue its run as the longest on record.

Enter Covid-19, the novel coronavirus. As the impacts, and unknown potential impacts of Covid-19 rapidly became more well-known, all risk assets were sold, at times indiscriminately.

Headline index performance is reported in the below table: 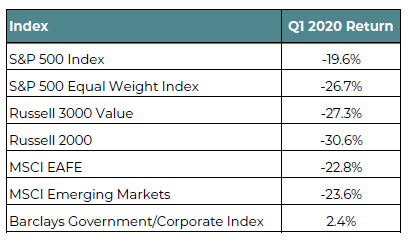 A few notable statistics to contextualize the unique period:

As social distancing and shelter in place decrees were implemented across the country in March, the effect on the economy was immediate. The impact is seen in US weekly jobless claims that have risen from 281,000 two weeks ago, to 3.3 million last week, and 6.6 million for the week ending March 28th.

To combat the forced closure of economies needed to slow the virus, global governments, markedly the US Government responded with one of the largest economic stabilization support packages on record, dwarfing even the 2008 and 2009 period. The Federal Reserve dusted off lending and credit facilities last used in the Global Financial Crisis and developed additional programs to support liquidity while Congress passed a $2+ trillion package, providing relief for mostly workers, small businesses and municipalities. The government support is intended as a bridge loan until the economy “reopens”. Headlines expected in April related to unemployment claims and the unemployment rate will be on par or worse than what was reported in the Great Depression. Output (e.g. GDP) will likely show a slowdown for the first quarter but may also exceed the worst periods in history in the second. The difference this time is the large-scale intervention and “do whatever it takes mentality” that wasn’t possible during the Depression and was slow to be implemented following the Global Financial Crisis, which offer the potential for a faster recovery.

In addition to the rapid spread of Covid-19, markets were also forced to digest an unexpected oil price war between Saudi Arabia and Russia. From the beginning of 2020, oil prices fell from $67.77 a barrel for Brent Crude Oil to $24.74 a barrel at the time of this writing. At these lower prices, not many companies, let alone sovereigns, can sustainably produce the commodity. The ramifications for the US energy sector of lower for longer oil prices are exacerbated by the curtailment of demand stemming from the shut-down of the US economy.

Combined, returns were broadly negative across most asset classes during the quarter, except for the highest quality fixed income securities. US equity markets outperformed international markets. Large capitalization shares outperformed small capitalization peers. The one pocket of strength in the difficult quarter remained the largest technology and growth-related businesses which entered the sell off at elevated valuations. The dominance of these large technology companies in the S&P 500 can be seen by looking at the headline index return of -19.6% relative to the S&P 500 Equal Weight return of -26.7% (per FactSet).

With the first quarter behind, we must now look ahead. The market is a discounting mechanism and is effectively weighing two divergent paths. The optimistic scenario is for a period of brief pain followed by a strong recovery. The more worrisome scenario is that the virus lingers and the economy remains closed for a longer period of time as infections and deaths mount. With time, a vaccine will be available and we will return to a feeling of “normal” but at best this appears months away.

Times of market stress are a reminder of the importance of asset allocation first and foremost. Bond yields may be low, but they do provide ballast and stability to portfolios in volatile periods. Within portfolios, we have been able to take advantage of entry points that we believe will prove attractive over a two- to three-year time horizon. Given the uncertainty, we remain focused on durable franchises able to weather a tumultuous environment. We would not be surprised to see volatility continue until we see a reduction in the hospitalization rate and clarity when businesses will be able to reopen. However, attempting to time the eventual bottom has historically been a losing wager. Each crisis is unique, and we are reminded that following periods of stress markets have rebounded, often-times with the strongest returns following the point of maximum drawdown. Our belief in the US economy and human ingenuity remains steadfast and we are optimistic about the prospects for future returns over the longer-term. As such, we continue to underscore the importance of remaining invested and offer to you the following chart illustrating returns 12 months following periods of market stress:

We believe patience will be rewarded and appreciate your continued confidence. Our people and our clients are our most important assets and we’ll get through this together.

Stay healthy and be well.