In client conversations late last year, we often noted that if the year 2021 was a movie, it would be “Up,” the 2009 movie about a balloon salesman, Carl Fredrickson, who attempts to fulfill a lifelong dream by tying thousands of balloons to his house to fly away to the South American wilderness only to discover a little boy named Russell hid as a stowaway aboard the balloon-powered house.

Why does this movie remind us of the year just finished? As we monitored the markets and the broader economy throughout last year, we witnessed asset prices, input costs, corporate earnings and economic activity floating higher and higher, like Carl’s house. This was true for the equity markets, commodity prices, wages and inflation. It was even true for interest rates which were higher at the end of 2021 then at the beginning of the year.

And who might Russell represent? The Federal Reserve. The Fed deserves much credit for their quick response to the lockdown of the economy in the early days of the Covid-19 pandemic when it injected significant liquidity into the financial markets. Throughout the recovery, they have kept interest rates low despite a recent and significant increase in price levels. Now they hope to find a way to gradually remove this accommodation without disrupting the markets or the economy. They, like Russell, are the stowaway- one who tries to get from one place to another without incurring a cost. How this story will unfold no one knows, not even the Fed. But it is worth reviewing the Fed’s past and current plans, as well as market reactions to historical tightening cycles to prepare for what might lie ahead for markets in 2022. But let’s first look back at what was truly a remarkable year for the markets.

Equity markets had a strong year in 2021. The S&P 500 Index had a total return of 28.7%. The S&P Small Cap 600 Index was up 26.8% and the Russell 3000 Value Index returned 25.4%. Returns for international markets were mixed, however, with developed international markets, as measured by the MSCI EAFE index (gross), up 11.8%, while the MSCI Emerging Market Index (gross) was -2.2% for the year, weighed down by regulatory actions by Chinese authorities.

Commodity prices were higher, with the S&P GSCI Commodity Index up 37.1%, led in part by strong gains in oil prices. Brent crude, which represents over half of all crude oil traded internationally, climbed more than 50% during the year to end the year at $77.78/barrel according to Reuters. Interest rates, as measured by the benchmark 10-year Treasury yield were higher, increasing from .92% at the beginning of the year to 1.51% at year-end.

Some good news for the American worker, according to the Bureau of Labor Statistics average hourly wages for non-supervisory workers were up 5.5% y/y as we closed out the year. While not included in the calculation of the Consumer Price Index (CPI), a widely followed measure of inflationary trends, increased wages are generally coincident with higher inflation. In that regard, headline CPI rose 7% y/y for the month ending December 2021, the highest 12 month increase since the period ending June 1982.

This gets us back to the Fed, which is charged with maintaining acceptable, but not excess systematic inflation. As noted, the Fed was very responsive in the early days of the pandemic, cutting its federal funds rate target by a total of 1.5% to a range of 0% to .25% at its meetings on March 3 and March 15, 2020. The federal funds rate is a benchmark for other short-term rates, and often affects longer-term rates. These cuts were aimed at supporting spending by lowering the cost of borrowing for households and businesses.

The Fed also resumed purchasing publicly traded debt instruments, mainly U.S. Treasuries and mortgage-backed securities (MBS), through a program known as Quantitative Easing (QE), a key tool it employed during the Great Recession. This action was initially aimed to ensure smooth functioning to these two important markets, which play a critical role in the flow of credit to the broader economy. The Fed was purposely vague about its intentions with QE in the early days of the pandemic given the uncertainty about its ultimate impact on the U.S. economy. On March 15, 2020, the Fed said it would buy at least $500 billion worth of Treasury securities and $200 billion worth of government-guaranteed MBS over “the coming months.” On March 23, 2020, it made the purchases open-ended, expanding the purpose of QE to aid in supporting the economy. In June 2020, the Fed set its rate of monthly purchases to at least $80bb in Treasuries and $40bb in MBS.

The Fed implemented other programs during the early days of Covid and combined with their actions in lowering interest rates and injecting liquidity into important financial markets, the U.S. economy enjoyed a sharp rebound from its 2Q20 lows with Real Gross Domestic Product (GDP) back to its pre­ Covid trend line for the quarter ending 3Q2.

At the same December 2021 FOMC meeting, the Fed also signaled that most of its members expected to raise interest rates in three one-quarter percentage moves in 2022, with the first-rate hike in March 2022 now on the table. This would put the federal funds rate target in the range of .75% - 1.00% by year-end, certainly higher than where we are now, but still low on a historical basis.

With QE scheduled to wind down over the next several months, and the Fed poised to start raising interest rates sooner rather than later, the lingering question for most investors is how the equity markets will react. To help answer that question, we’ve gone back, with the help from our friends at Strategas, to look at the market’s historical performance both leading up to and after the first-rate hike and during the last four Fed rate hiking cycles. 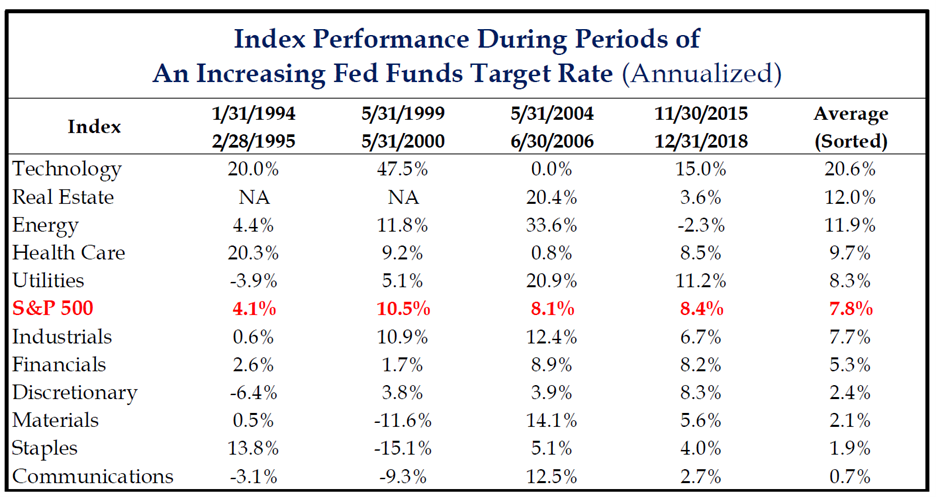 As illustrated by the data in the above charts, the equity market has generally reacted positively both in periods leading up to, and after the Fed’s first-rate hike and in cycles of an increasing federal funds target. This suggests that we don’t necessarily need to fear the Fed, at least as it relates to higher interest rates (provided the pace of rate hikes is gradual and rates don’t get too high to the point they begin to negatively impact economic activity). The wind down of QE, and the eventual introduction of Quantitative Tightening (QT), where the Fed starts to reduce the size of its balance sheet remain wildcards and investors should remain vigilant. To that end, we again remind investors to stay focused on quality and pay attention to valuation, which we have found is the key to long-term performance, even if there is a stowaway on board.