The stock market correction that occurred in the second half of 2018 was not accompanied by the rotation from momentum stocks into value stocks that many would have anticipated. Indeed, as analysis from J.P. Morgan shows in Figure 1, the valuation spread between momentum and value actually spiked to levels not seen since the technology bubble of 1999. In other words, as concerns mounted about economic slowdown and geopolitical tensions, investors crowded into stocks that were working and less volatile – regardless of valuation. 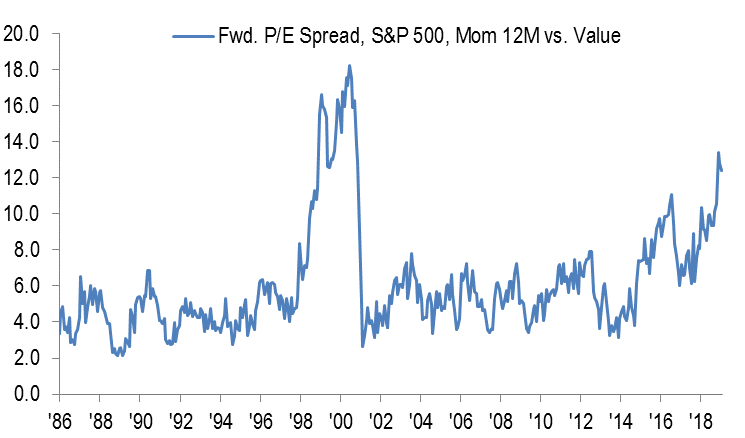 Which brings us to the topic of this quarter’s Perspectives: if a meaningful correction in stocks is not enough to reverse the outperformance of growth stocks over value stocks, what would stop this trend and when?

Berkshire Hathaway’s Charlie Munger succinctly notes, “All intelligent investment is value investment.” Buying a company at a discount to its intrinsic worth (or the present value of its future cash flows) is, of course, a smart strategy, and we doubt even a growth manager would admit to knowingly purchasing an overpriced security. The difference lies in the confidence of predicting the future: value managers rely more on today’s profits and cash flows and remain humble in the ability to predict the future; growth managers will rely on the growth of anticipated cash flows to justify paying a higher valuation for a security.

Figure 2 displays the performance of the S&P 500’s growth stocks relative to value stocks, rebased to 1995. It shows a period of strong growth outperformance as the technology bubble inflated in the late 1990s, and then a quick snap-back to value stocks as the bubble burst. After several years of roughly similar performance, there has now been a decade-long swing in growth’s favor. There are many possible explanations for this trend but we would highlight the following:

Low interest rates: rates have remained below 3% since the recession and, despite recent monetary tightening, remain at levels below historic norms. When interest rates are low, future cash flows get discounted at a lower rate, inflating their present value. This supports higher valuations, particularly for growth companies whose cash flows are more weighted to the distant future than value companies. Furthermore, easy money can fuel risk-seeking behavior as capital chases the higher returns that may be afforded, at least in the short-run, by more exotic assets and securities.

The economic cycle: it has been a long, albeit slow, economic recovery. While historical data does not show a strong correlation between value outperformance and economic conditions, it is often true that when the economy slows, less profitable companies, and those that cannot internally generate cash flows needed to finance their operations, can struggle. As Warren Buffett observed, “Only when the tide goes out do you discover who’s been swimming naked.”

The Winner’s Circle: while trading on elevated valuations, some of the companies that have driven market returns over recent years are actually remarkable companies, and are deserving of high multiples and significant market capitalizations. We can quibble with valuation, but companies like Amazon, Netflix, Google and Facebook are well-positioned, well- run and have strong customer offerings. In a prior Perspectives (Risky Business, 2017), we commented on some of the more dubious or unsustainable business models that have benefitted from an environment of easy money and irrational investor behavior. While we have seen Bitcoin collapse (and in our opinion, more downside ahead) and MoviePass effectively shutter, the aforementioned global technology companies have sustainable competitive advantages and will likely continue to be large, well-run companies in the years ahead. It may seem unfair that companies like Wal-Mart and Disney are expected to earn their cost of capital, and pay dividends to shareholders, while Amazon and Netflix are allowed, without penalty, to reinvest all their sales dollars to build their offerings, but such is life.

Index investing: in 2018, active equity funds suffered $174bn of outflows, while passive funds enjoyed $207bn of inflows. This long-term trend has driven passive’s share of equity assets to rise from just 20% in 2007 to 49% today and will likely overtake active this year. When money is allocated to an index fund or passive vehicle, it is invested agnostic to valuation or judgement. As the largest companies (by market capitalization, not sales or profits) receive the greater allocation of investment dollars, there is a strong tailwind for highly valued companies irrespective of fundamentals. 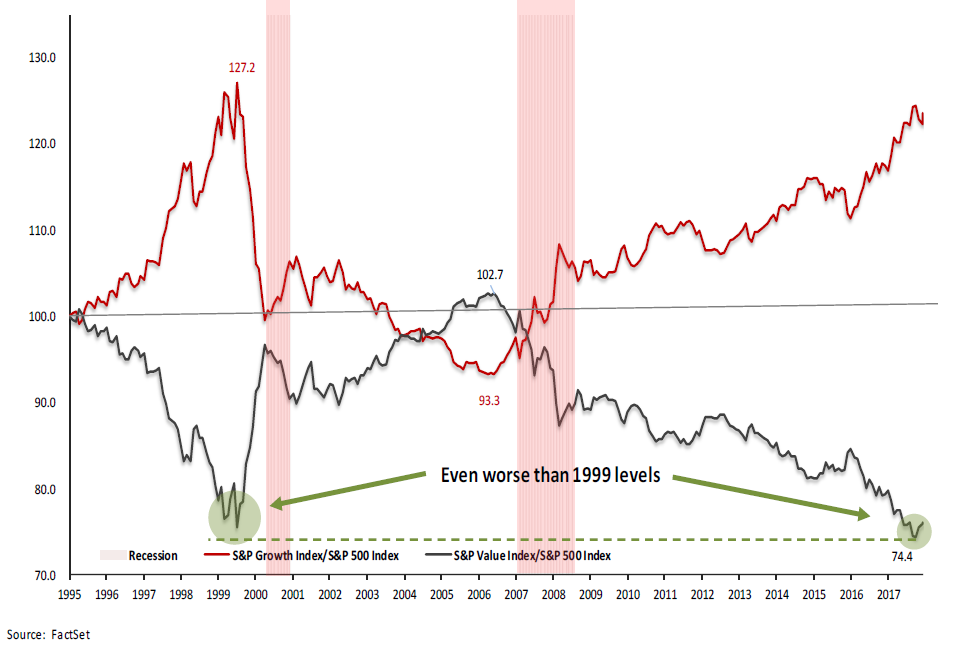 “…in the current up-cycle, over-weighted, liquid, large-cap stocks have benefitted from forced buying on the part of passive vehicles, which don’t have the option to refrain from buying a stock just because its overpriced…..Like the tech stocks in 2000, this seemingly perpetual-motion machine is unlikely to work forever.”

As passive investing crosses active to become the more prevalent equity strategy, an interesting question arises. The premise that has given rise to passive investing is that active managers cannot beat the market because the market is efficient – the so-called Efficient Market Hypothesis. But under this theory, the market is efficient because of active managers doing their jobs of discovering undervalued and overvalued securities and establishing a fair market price in the process. One wonders at what point the decline of active investing no longer sets a fair market price upon which passive investing effectively freeloads. Given the significant resources still dedicated to stock analysis, this question is likely just a philosophical one for now, but as passive strategies take an increasing share from active managers, it might not always be just an interesting but abstract discussion.

While the level of interest rates or the economic cycle can help to contextualize the performance of growth stocks over the last decade, perhaps the most significant, over-arching factor comes quite simply down to one thing: investor sentiment. While computer algorithms and pre-determined index weightings may govern where the flow of passive dollars are allocated, it is investor behavior and decisions that direct the flow to passive in the first place. And it is the collective wisdom of the crowd that determines the valuation of individual stocks, and anoints winners and losers with high or low valuation multiples.

Marks continued in his memo,

“…for a stock to be added to index or smart-beta funds is an artificial form of increased popularity, and its relative popularity that determines the relative prices of stocks in the short-run.” This is reminiscent of the famous Benjamin Graham quote: “In the short run the market is a voting machine, but in the long run it is a weighing machine”.

Value investors are typically long-term investors. The short-run can be frustrating, but remaining disciplined to the investment philosophy is an important element to long-term success. Predicting the timing of shifting investor behavior is tricky, but sentiment will shift for reasons that may be predictable or unpredictable. Whether an economic shock, recession or other event curtails the enthusiasm for growth companies, or whether it is the law of large numbers catching up with some of the last decade’s winners and growth rates slowing to levels that no longer support lofty valuation multiples.

Commenting on the above chart, investment manager Bill Smead wrote, “if this isn’t the easiest mean reversion trade since 2000, we’d like someone to show us one which is better.” While we might not be as bold as to call such a reversion a “no-brainer”, we are confident that value stocks will regain their cache, and given the extended period of underperformance, this could be the most meaningful investment trend or theme that occurs over the next few years.