In late 2020, Jack Ma, the founder of Alibaba.com (known colloquially as “the Amazon of China”), publicly criticized Chinese regulators for imposing tighter regulations on financial companies and hurting innovation. His comments proved to be expensive – regulatory actions days later would scuttle the $37 billion initial public offering (IPO) of Ant Group, a prior spin-off from Alibaba.com and a payments powerhouse. That was just the beginning for Ma and regulatory incursions, however. Since then, there has been a firestorm of new regulatory measures in China, the scope, intensity, and pace of which has taken everyone by surprise.

To date, actions have been broad-ranging and include the initiation of antitrust reviews, multi-billion fines for anti-competitive practices, enforcement of worker protections, stringent new privacy laws, review of variable-interest entity structures (VIEs) used by Chinese companies to list in the U.S., and even requiring the once $100 billion private education industry to become “non-profit”; this to ease the burden on poor students and their families. Probes have also been initiated to review “cozy” government-industry relationships (some tied to Alibaba) while other investigations have put on hold tens of domestic IPOs.

Unlike most countries, policy actions have been announced and implemented abruptly with virtually no public input, dialogue with affected industries, or forewarning of impending actions. Such events have also prompted the U.S. Securities and Exchange Commission (SEC) to rev up disclosure requirements from Chinese companies. Combined, the myriad of actions has unsettled investors and has led to the loss of ~$1 trillion in market value of Chinese equities since their peak in February.

“Why?”, many have asked about the swift and sizable increase in regulatory crackdowns. After all, China’s seeming embrace of capitalism (to a point, at least) had succeeded in creating vibrant industries, boosting its economy, and lifting hundreds of millions out of poverty. Alongside, many private companies amassed globally competitive scale and recognition, while creating scores of billionaires in the process.

The government’s rationale underpinning regulatory actions is unstated. But based on the measures taken so far, policy goals appear to be driving the regulatory assault. One policy objective appears to be harmonizing economic growth with social goals (“common prosperity”) in the face of widening income inequality. Another appears to be boosting innovation as trade tensions with America over the last few years have amplified the Chinese government’s desire to catalyze self-sufficiency. This would inherently require significant domestic innovation. Chinese technology companies have also acquired an immense amount of data on Chinese citizens through wildly popular consumer apps and services (like WeChat, Weibo, TikTok, etc.). Ensuring the security of such data, especially in the geopolitical context, appears to be another driver of the recent regulatory push. Finally, Beijing reasserting itself as the ultimate power is a factor that cannot be ignored.

The manner in which the changes have come about, however, has alarmed investors as evidenced by the significant loss of market value – much of which is domestic Chinese capital. And even from here on, investors face a conundrum. On one hand, many questions remain: what additional measures are coming? What industry, sector, or company will be targeted next? Can they trust the government and its recent pledge to define processes for future regulatory decisions?

On the other hand, China is likely to remain an economic powerhouse, whether or not it surpasses the economic output of the United States. Still positive demographic trends, rapid digitization, and rising innovation bode well for long-term growth. An ensuing shift to a consumption-based economy with a rising middle class also makes China one of the most attractive markets for companies worldwide. McKinsey sizes this consumption growth at $5 trillion over the next decade, representing the biggest market opportunity for leading American companies like Apple, Nike, Starbucks, and Tesla, to name a few. 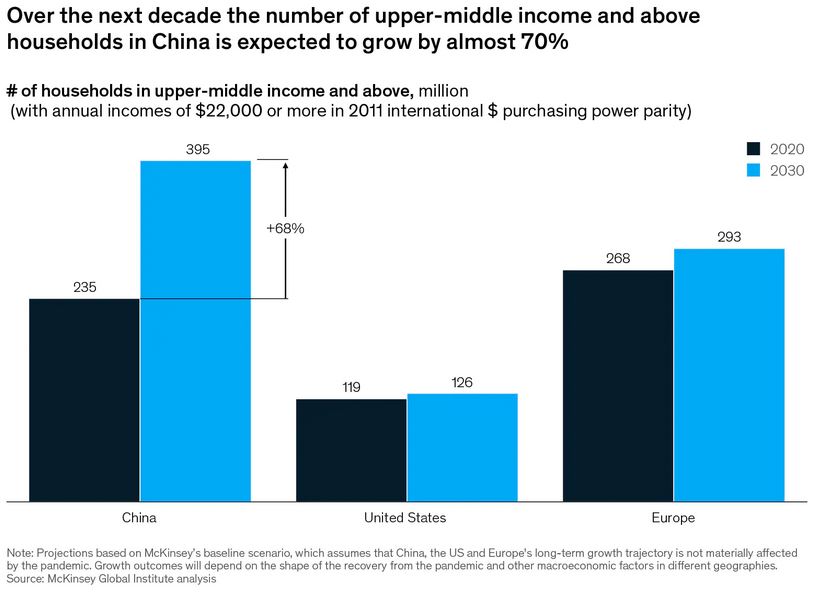 As fiduciaries of capital, global investors have another major factor to consider. In 2020, China accounted for 17.4% of global GDP compared to the United States at 24.7%, according to The World Bank. However, the total market value of Chinese equities accounted for only 11.6% of global equity market capitalization compared with 38.5% for the United States, per SIFMA. The data does not reflect the continued market surge in the United States and the declines seen in Chinese markets in 2021. Separately, China represents a paltry 4.1% of the MSCI ACWI Index, with the United States at 59.6%. With trillions of dollars benchmarked to the index, and MSCI’s gradual move to raising China’s weight to reflect its growth and size, Chinese equities have structural support as well.

One can always debate China’s political setup and its ad-hoc approach to regulation. From a capital markets perspective, though, China is a market that is hard to ignore.