This September marked the 20th anniversary of the 9/11 attacks. I’m sure we all remember where we were that morning, watching with disbelief and shock as the tragedy unfolded before our very eyes. The attacks that killed almost three thousand Americans, left an indelible mark on our nation.

The United States has overcome many pivotal moments in its history. In more recent times, the Great Financial Crisis, and the confluence of significant societal and political events have raised questions about the capitalist economic system which is a bedrock of the American story. The rise in inequality and social unrest has rightly led to much soul-searching, both individual and collective. Considering tough questions around race, equality, and economic and social justice is an important responsibility and should be done with humility by those who have benefited most significantly from the political, economic, and societal systems that exist today.

The ability to achieve success and prosperity regardless of where, and to whom, someone is born, is the central tenet of the American Dream. Hard work and playing by the rules should be enough to enable a comfortable existence. But the American Dream, is increasingly difficult to achieve in the United States. The World Economic Forum measures social mobility in their Global Social Mobility Index and currently ranks the U.S. in 27th place, globally. Well ahead of China (45th place) but meaningfully behind the Nordic countries that top the list, primarily due to broader access to education and healthcare, and higher wages at the lower end of the spectrum. Harvard’s Raj Chetty, a leading academic is this field, has found that while 90% of Americans born in 1940 would go on to earn more than their parents by age 30, that percentage had fallen to less than half for those born in 1980. His work also shows that the chances of moving from the poorest quintile to the richest quintile is just 7.5% in the US, compared to 13.5% in Canada and 11.7% in Denmark. 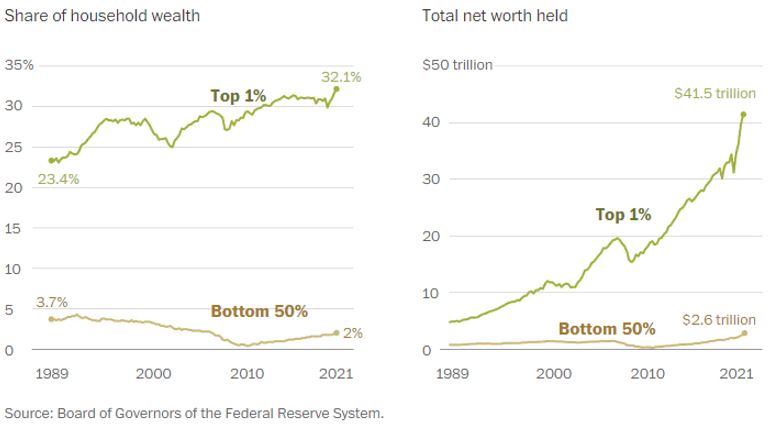 It is therefore not surprising to see resentment and distrust building amongst many in our society, and to defend capitalism has become not without risk of skepticism or judgement, especially in Portland, Oregon! Judgement aside, we believe that capitalism has been an overwhelming force for good over the last century and should be lauded for its achievements. Allowing market forces to direct investment decisions and resource allocation, has proven to be the most efficient and productive way to grow the economy, and raise standards of living for the vast majority of the population.

The degree to which government policy should intervene in markets should always be open to debate – whether a country emulates the “stakeholder” capitalism of the Nordic countries or leaves more to Adam Smith’s “invisible hand” and the individual pursuit of one’s self-interest. That debate is at the core of a functioning democracy and most people would readily accept that the government does have a role to play in ensuring a level playing field. But the debate should remain market-based.

While acknowledging that Wall Street is certainly not Main Street, the strength of U.S. equity investments over many decades, when compared to most international markets, is quite stark. 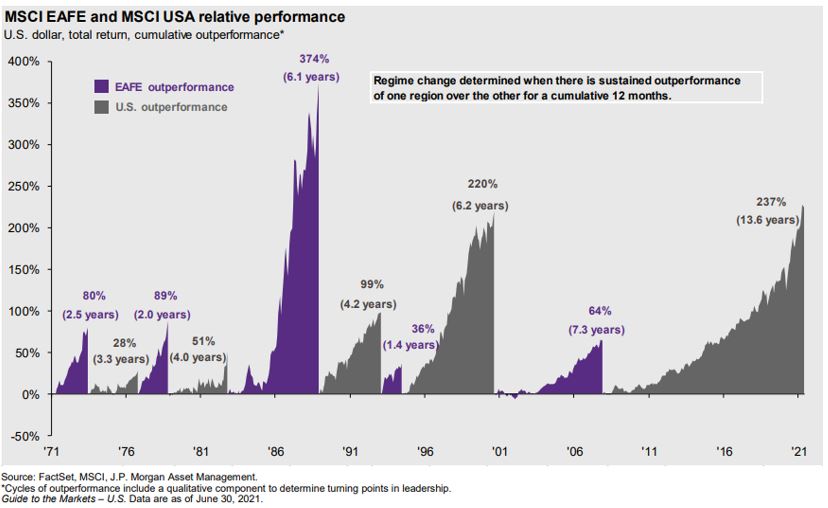 While much of this outperformance of late could arguably be attributed to a handful of technology companies and a rather exuberant investor base, it is worth considering why the largest technology companies are indeed, American. And as a counter point the recent regulatory crackdown on technology companies by the Chinese government has not only impacted those companies but the investment outlook for Chinese companies more widely. Without an established rule of law free from arbitrary government interference, the long-term misallocation of resources and human ingenuity is a significant risk to the economic development and prosperity of a country and its people. In addition to the laws, institutions, and culture that have made America a natural home for business development and entrepreneurship, I enjoyed this following viewpoint from British playwright Stephen Fry. While wholly unscientific, I think there is something to his thesis that the gene pool, with notable exceptions, is largely comprised of people who wanted to leave somewhere seeking something better, and took the risk to achieve that: “Europe is just basically a gene pool of people whose ancestors said, “I can’t risk it”. America is a gene pool of people that said let’s risk it, let’s try it!”

The failings of capitalism should be addressed and many well-known billionaires themselves believe in higher tax rates for the wealthy. But a significant deviation from capitalism could jeopardize economic progress, and the trajectory of the gains in healthcare, life expectancy, education and basic freedoms that we have enjoyed over the last 200 years.

As Warren Buffett said last year, “We ought to do better by the people that get left behind by our capitalist system. I don’t think we should kill the capitalist system in the process…We should make sure the golden goose keeps laying more eggs and it’s worked wonderfully since 1776.”