In late December 2020, a member of our investment team sent an email to a company researched by the team. The company (“A”) was a significant owner in another company (“B”), which had recently merged with a Special Purpose Acquisition Company (SPAC), thereby becoming a publicly traded entity. The email suggested to Company A that it sell their stake in Company B knowing well that such a move was unlikely given the strategic nature of the investment. The point of the email was to underscore what we considered to be an irrational valuation placed on Company B, which, to this day has promising technology and a growing business.

As you might know, SPACs raise funds via an initial public offering (“IPO”) for the express purpose of acquiring an operating company, or a company with an underlying business. Beginning in mid-2020 and through 2021, SPACs raised a record amount of money – a cumulative of over $225 billion, compared to substantially smaller numbers in prior years. The ease with which SPACs were able to raise funds while getting significant discretion over the nature of its future acquisitions and deal economics was a sign of the market’s “risk-on” mindset – in part at least caused by historically low interest rates and trillions in liquidity injected by the government to combat economic risks from COVID. 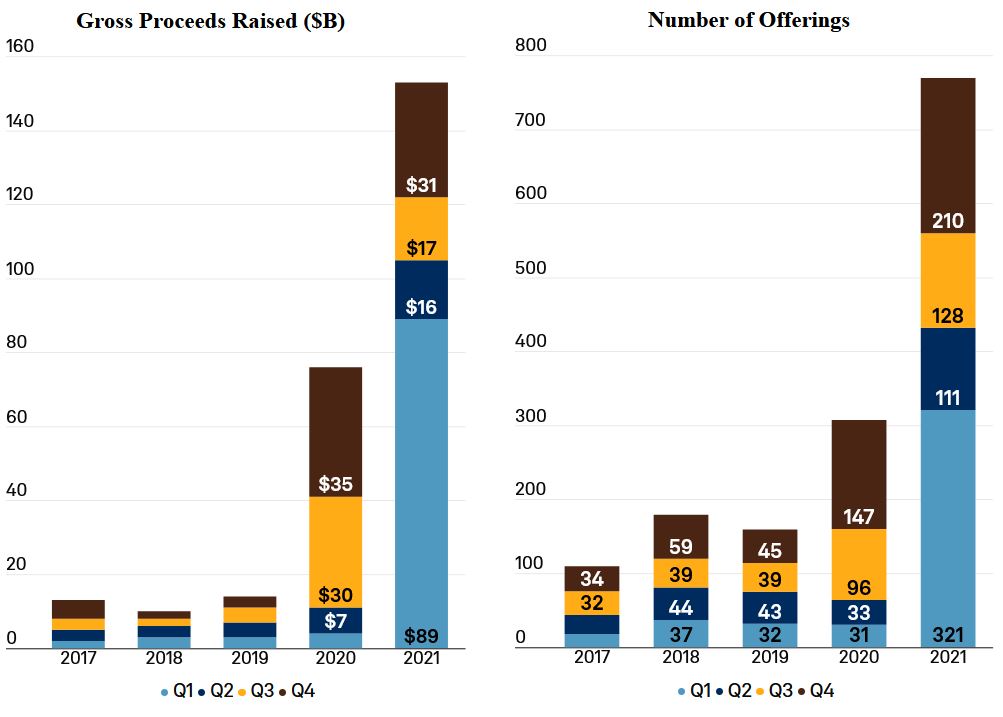 Such a surge in SPAC raises essentially led to an arms race to acquire operating companies, bringing hundreds of previously private companies to the public market at deal terms frequently favorable to the original SPAC sponsors. Other companies also took advantage of market conditions to become public via the traditional IPO route. Companies spanned industries and varied from established ones to those with no revenue at all, including many loss-making companies. Thereon, bold, and sometimes definitive-looking projections from these companies, fueled share prices and valuations, in many cases to head-scratching levels. In the moment, which lasted quarters but felt like eternity, the investment team wondered what it was missing.

As 2021 progressed, inflation began to soar and the need for the Fed to raise rates and scale back on monetary policy dominated investor discussion. The specter of rising rates with a still uncertain post-pandemic growth outlook weighed on investor’s risk appetite and ultimately led to higher sensitivity regarding fundamentals and valuations. Such sensitivity has persisted into 2022 and thus far investors have favored established companies with strong cash-generating businesses, credible management teams, and robust balance sheets. To wit, Company B’s share price peaked on the day of the email in December 2020 and have since declined over 87%, losing roughly $21 billion in value. And even at this price, a compelling investment case is hard to make.

SPACs and IPOs aren’t the only investable assets where excesses may have occurred. The last decade of monetary accommodation has coincided with significant increases in asset classes from equities and houses to cryptocurrencies and startup companies. While housing prices are continuing their upward march, likely benefiting from their position as an inflation hedge, cryptocurrency prices and startup valuations have eased off their highs. Bitcoin now trades at roughly $47,068, down from its all-time high of $67,567 seen in November 2021. And just last week, Instacart, a private grocery delivery unicorn, reduced its valuation by roughly 40% (or $15 billion) compared to its last round of fundraising in March 2021 citing market conditions. We suspect that a correction in private market valuations may yet be underway given the meaningful decline in public market comparisons.

The above-mentioned correction in asset prices is oddly reassuring to investors like us, who, remain focused just as much on protecting your capital as much as growing it over the long term. In general, we believe that we will remain in an investing environment in which valuations are driven by the underlying strength of the business or asset, and not liquidity-induced exuberance. It is no coincidence that it is happening just as the Fed is racing to normalize interest rates amidst decades-high inflationary pressures.