In 1982, a farmer from the Victoria region of Australia arrived to compete in the inaugural Westfield Sydney to Melbourne Ultramarathon, wearing his work boots and overalls. Cliff Young had experience running – in his youth he rounded up the sheep on his family farm by foot and more recently in local marathons where he had clocked a personal best at just over three hours. His running style was rather unique and would become known as the Cliffy Young shuffle. It was slow but deceptively effective. After trailing the leaders by a large margin after the first day of the ultramarathon, he continued running through the night while others slept. He did this again, and again, and again – not sleeping for five straight days as he just shuffled along. On the fifth day, he won the race a full 10 hours ahead of the runner-up and beating the prior record of any Sydney to Melbourne race by two whole days.

I once met Cliff Young, when I was driving with an Australian friend through the rolling country hills outside of Melbourne, returning from a visit along the Great Ocean Road. My friend was telling me this story, as he was aware that this was the region where Cliff had lived, and as we crested a hill we saw this figure in the distance ahead shuffling along the road. It was him! My friend was elated to have met the man who had become an Australian legend. We stopped to say hello, and with just a nod and a smile, he turned up the gravel road to his farmhouse without breaking stride.

I’ve often thought that the story of Cliff Young has valuable lessons for investors; from the importance of maintaining discipline, understanding your strengths and weakness, and having the determination to keep working hard. But given the remarkable investing environment of the last few years, two lessons in particular come to mind.

Firstly, expect the unexpected. A pandemic that has impacted economies and financial markets like never before could not have been predicted or even contemplated. It pays to be humble in your attempts at forecasting future trends, to accept that things will happen that you cannot envisage, and that “tail events” happen more often than you might imagine.

Secondly, as the classic tortoise and hare story tells us, it is important to stay the course, think long-term and, if you believe in your strategy, not to become overly complacent after periods of strong performance, or despondent after periods of underperformance. At time of writing (April 22nd), many of the names that performed so well in 2020 - the pandemic winners - have come crashing back to earth; Zoom Communications has fallen -69% over the last year, DocuSign -61% and Peloton -80%. Meanwhile, some of the “pandemic losers”, have now recovered and are even outperforming the high-fliers since the onset of the global shutdown in March 2020. Don’t cash out of your tortoises as you chase the hares. Be like Cliffy. 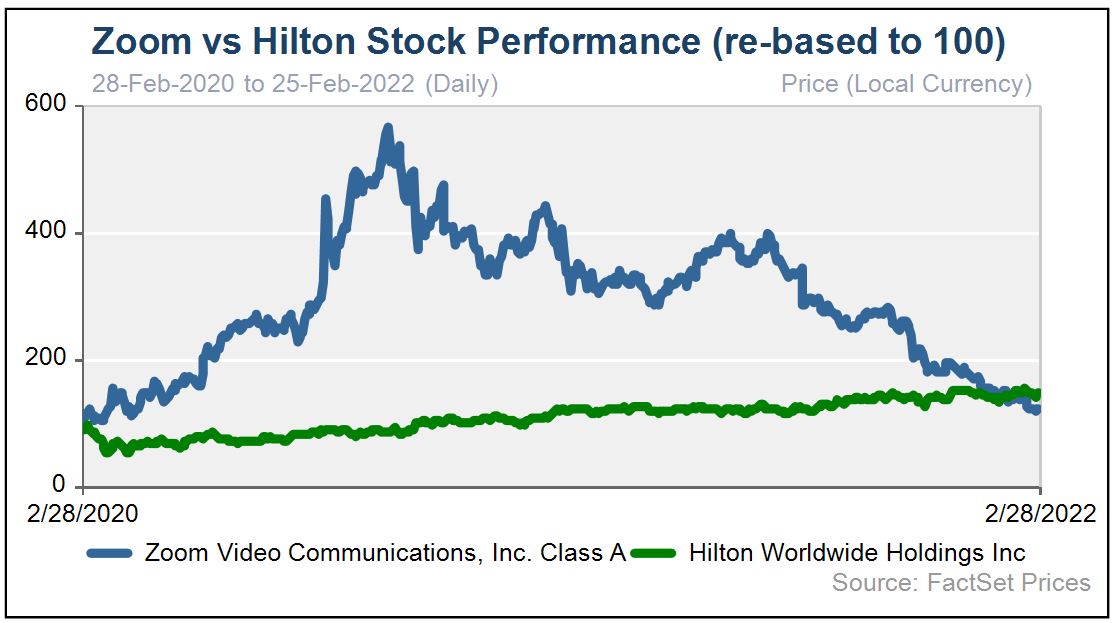 The opinions expressed represent those of the author, and is not intended to be a forecast of future events, a guarantee of future results, nor investment advice. This commentary does not provide information reasonably sufficient upon which to base an investment decision. The information discussed herein, including specific securities, is solely intended for illustration purposes and do not represent all of the securities purchased or sold in client accounts. Furthermore, this should not be considered an offer or recommendation to buy or sell any security. All performance referenced is historical and is no guarantee of future results. Investing involves risks including possible loss of principal.